Esther Frustino, a longtime friend of HCA and mom to Andrew, a resident of HCA, is turning 50 this month. She wanted to spend her 50th birthday by celebrating her health and doing something memorable, but also something hard. She chose to run a 50k for her 50th birthday. After hiring a running coach, she began diligently training and she is ready to run! But it was also important to her to give back to the community and choosing HCA as the beneficiary was not a hard decision at all. 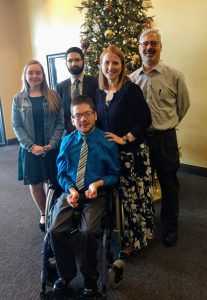 Esther’s son, Andrew, has been receiving services through HCA for most of his life. His first contact with HCA was through service coordination when he was just two years old. Shortly afterward, he began attending preschool where he received Special Education and Speech, Occupational and Physical therapies. After graduation from preschool, he began utilizing respite and community habilitation services while living at home with his family. As an adult, Andrew is now a resident at one of HCA’s group homes where he loves his staff and housemates. HCA has provided much needed support and many services to Andrew and his family for 24 years and they are very grateful for Andrew’s devoted staff and the quality of care he has received. Esther is running a 50K to say thank you to HCA by asking for your donation of $50 or any amount.

Esther will be running her 50K at Newbsanity’s Extreme Ravine and you are welcome to run a lap or more with her. The 50K is 10 laps of the ravine and each lap is a 5k (3.1 miles). Please be advised that the Extreme Ravine is a technical course and involves multiple creek crossings, rope climbs, elevation changes and lots of mud, but it is so much fun!